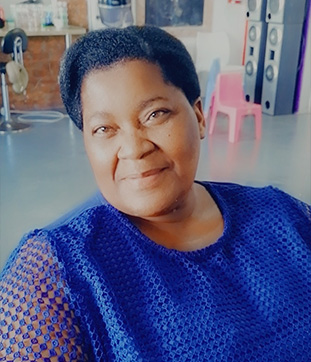 Boniswa is a mother of five children, three daughters and two sons; they are all grown up. As a Reverend, Boniswa currently ministers at Ntabakandoda Circuit at Kwa-Komani District in the Eastern Cape South Africa under the leadership of UMCOSA (the United Methodist Church of Southern Africa). She is a qualified counsellor and skilled trainer who has worked for 13 years in the diocese of Port Elizabeth, Anglican Church, helping people to develop lifeskills and providing therapeutic counselling to traumatised women and children. Between 2009 and 2012 Boniswa worked with an organization called WAWA (Woman Against Women Abuse) providing conselling to victims of gender based violence and at the end of March 2014, she began working with small groups and individuals focusing on developing and strengthening family bonds.

Boniswa trained in VMT in Oudtshoorn South Africa, qualifying as a registered professional practitioner in 2013. She is dedicated to the work of VMT and has managed to initiate the registered not-for-profit organization Voice Movement Therapy Eastern Cape (VMTEC) which has been endorsed by the National Department of Social Development. Boniswa has been invited to the South African Parliament to present the statement on the challenges faced by the communities in the Eastern Cape and has submitted the ‘Women Empowerment and Gender Equality Bill’ using VMT principles. Boni also works with the Department of Transport, facilitating VMT based workshops on depression, stress and anger in the working place. She also volunteers at the Educational Support Services Trust in collaboration with Health Department promoting good health within the communities with a focus on unborn children to age 19 years using VMT principles.