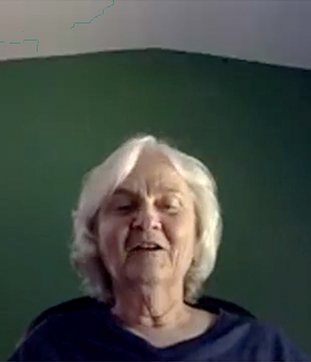 Anne Brownell, MA, VMTR, teaches and supervises on the Foundation Training in Voice Movement Therapy: The Voice Unchained, recently relocated to Marion, MA where it is affiliated with the Marion Institute. After studying and working in the Expressive Therapies with pioneer dance therapist Norma Canner and noted clinician and author Penny Lewis, Anne’s search for the vocal component for a movement-oriented therapy led her to be the first American to train in VMT with founder Paul Newham in London; to teach and supervise with him on trainings in both England and America; and to establish her own training program, first in the United States, with Christine Isherwood, VMTR (4 pieces of training), and then in South Africa (2 trainings).

She and Christine began a new Training in Oct. 2019, with students from Austria, Colombia, Hong Kong, the Philippines, Colorado, Massachusetts, New Jersey, Rhode Island and Vermont.  We are currently working virtually in sound and movement until such time as we can return to the Marion Music Hall for the final module of Year One, our residential Experiential Program.

Anne has also acted as a VMT consultant for schools, working with children experiencing developmental and language delays; taught the first for-credit graduate course in VMT, for Castleton College, Vermont; conducted a private practice and supervision; and presented at conferences here and abroad. Prior experience includes working in Early Intervention programs, supervising graduate students in Dance Therapy on the therapeutic use of the voice, and conducting music and movement groups for previously homeless and substance abused people with HIV and AIDS. Anne has served as scriptwriter and executive producer on several films on the Expressive Therapies, most notably A Time to Dance: The Life and Work of Norma Canner and Going to the Source: A Study of Group Process in the Natural World. Her CD, A Journey in Song, illustrates a range of possibilities inherent in a single human voice, and she delights in performing songs in different genres and sounds.